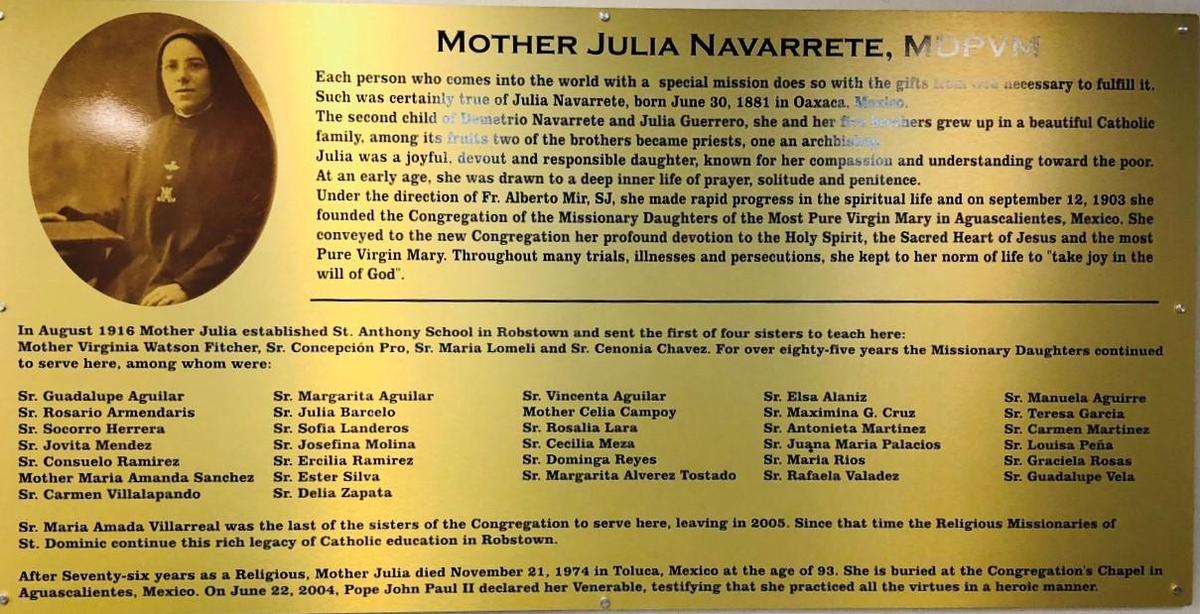 St. Anthony School was founded in Robstown, TX by the Missionary Sisters of the Most Pure Virgin Mary.  Blessed Mother Julia Navarrete began with 20 students who were children of Mexican migrant farm workers who picked cotton and vegetables in the fields surrounding the village of Robstown.  True to its roots after 104 years of service, St. Anthony School continues to serve a predominantly Hispanic population in the community of Robstown.

The present school building was constructed. St. Anthony School is located in a residential area (by the railroad track) in Robstown, Texas.

St. Anthony School joined the Corpus Christi diocese in seeking accrediation with the Texas Education Agency. At that time, the school consisted of grades Kindergarten through 6th Grade.

Since September of 1974,the VESS organization (Volunteers for Educational and Social Services) sponsored by the Texas Catholic Conference has provided the school with several qualified teacher volunteers each year.

Two pre-kinder grades were added to the school system.

An attempt was made to consolidate St. Anthony School with St. John School, the other Catholic school in town. After a year of experimentation of combining two campuses, the parishioners of St. John's Parish decided to close their school in May 1987.

The Corpus Christi Diocesan Board gave the approval to move forward with a plan to expand St. Anthony School to include the 6th and 7th grades from St. John School campus. The following year, the Diocesan School Board gave its approval for adding an 8th grade year for the school year 1997-98.

A new partnership was created as we initiated a contract with the University of Notre Dame to provide teachers from the Alliance for Catholic Education (ACE) Services through Teaching program/ministry. . Our partnership with Notre Dame continues to hold strong. We are determined to continue to proclaim the Gospel message responding to the unique personal need of each child.